Finding the right buffer weight, especially with shorter barrels, PDWs, AR pistols and CQB rifles is mostly a game of hit or miss.  bufffer weights are like shoes.  One day, a heavy H1 works great, the next day an H2 is needed.  Now, you add a suppressor, and bam -- you need an H3.

So, Potomac Armory brings us the variable weight buffer kit.  Four different weight variations make this the perfect buffer for any rifle.  Carbine rifle (and AR pistol) buffers are made with a comination of steel and/or tungsten metal weights.  Tungsten is one of the heaviest metals.  A standard carbine buffer has three steel weights, and the heviest buffer is the H3, and has three tungsten weights.  The H (also called H1) and H2, for Heavy and Heavy-2 are different mixes of steel and tungsten weights: 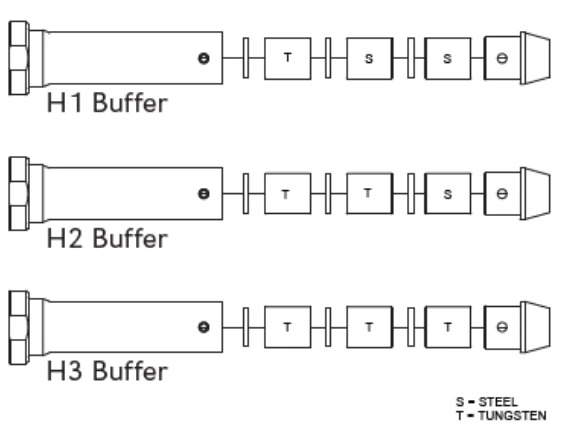 So, which buffer do I start with?  That is always the first question.  The Variable Buffer kit allows you to pick and choose which weight works best for your rifle, and allows you to change, as you change up your ammo or barrel length or use suppressed.  It is never easy to pick the right buffer.  As a rule of thumb, a 16" carbine or mid-length barrel will work best with a standard carbine buffer, and a suppressed 10.3" PDW will work best with an H3, and now you have two choices in-between.

The most common buffer question we get at Charlie's is:  "What buffer weight do I need for a 10.3" Mk18 unsuppressed fire?"  Well, usually that will be an H2, but if your ammo or your gas port size is non-standard, maybe and H1, or even an H3.  Did you want to buy all three buffers?  When you have the Potomac Variable Buffer System, you have a full mil-spec buffer and and pull the pin out and swap the weights.

The heavier the buffer, the slower the recoil of the bolt carrier group, and the less felt recoil, and the longer time the hot gasses have to move out of the chamber.  But, if the BCG moves too slowly, it might not travel far enough backward, and then fail to properly load the next round, causing inconsistent loading and ejection.

If the buffer is too fast, the recoil is heavy, gas is pushed into the operator's face and the action slams back into place, and putting unncessary wear on the bolt and the chamber, and is harder to handle.

The ideal situation is a longer dwell time and soft operation of the bolt carrier, removing as much gas as possible, limiting carbon build-up and wear on the mechanisms, and dissipating heat, all the while allowing for enough energy to lightly eject the spent brass and load the next live round.  A number of factors lead the the right timing of the bolt carrier group after discharge:  gas port size, distance from the gas port to the muzzle, barrel length, gas system, the ammo used, the back-pressure of a suppressor, if used, the weight of the carrier, and the weight of the buffer.  Most of these factors are not readily changable in the short term, except the buffer weight.  Until now, the answer was to have a pocket full of different buffers.

There are fancier buffers out there.  For less than the price of one Colt H3 buffer, you can have 4 buffers in one kit.

Potomac made this buffer to blend-in and not to stand out.  It is not red, and it uses a standard mil-spec anodized aluminum buffer and stopper.  Keep it simple.  You get six full mil spec weights, three rubber separators and a professional grade 1/8" pin punch as part of your kit.  the pin punch has a flat head to avoid damaging the pin.  And the pin is a specially designed coil spring pin, not the standard slotted pin.  The coil pin expands when punched into position and is more easily removable and longer lasting for multiple inserts and extractions.